AshBritt Featured in Media for StormZone Event in Miami-Dade County

While student meteorologists Nathalie Rock, Andrew Neunie and Salvador Cabrejos hold Hurricane Dorian weather briefings, a fire in a hurricane evacuation shelter needs to be extinguished by fire fighter’s Viesha Wooten, Shuyi Mo and Jennifer Hall, while 1,000 people are relocated to other shelters outside the evacuation area by Transportation’s Gertsen Jean-Louis and Melissa Pleteau.

The student mayor’s responsibility is to coordinate emergency support functions managed by fellow JFK Middle School classmates (firefighting, transportation, law enforcement, search and animal rescue, medical assistance, hazardous materials services and mass care, to name a few) to tend to the injured and ensure that evacuees are properly relocated to other shelters.

“We need to immediately find the injured and put the fire out,” said Mayor Louis to Search and Rescue’s Angie Rosario and Andrew Olawela. “Start removing the people and take them to other shelters” .

As soon as the shelter fire was resolved, an overturned tanker truck on Alligator Alley (I-75) left thousands of motorists stranded. Highly flammable fuel from the truck was spilling all over the highway and blocked motorists were overheated and dehydrated. To make things worse, pets were escaping from vehicles.

Again, Mayor Louis had to depend on fellow Weather Rangers to resolve this perilous situation and for student Broadcast Reporters to alert motorists to avoid this primary evacuation route.

“We need to get Hazardous Materials’ Brian Exius, Christopher Elliston and Chayanne Aubourg to clean up the fuel spill and Mass Care’s Seyeda Ferdausi and Leeyah Santaella to get food and water out to these people as soon as possible,” the Mayor directed. And Animal Rescue’s Isaac Dominique needs to see that the lost pets are safely returned to their owners.”

Following Hurricane Dorian’s passage, the Weather Rangers were faced with equally daunting challenges such as large areas of Miami-Dade completely under water due to massive flooding, leaving hundreds of people and their pets stranded on rooftops and trees.

“We need Transportation and Search and Rescue to get people to shelters or hospitals,” ordered student Mayor Louis. Also, Zoo Miami has been ravaged by Hurricane Dorian in which numerous animals, including lions and elephants, are missing and need to be captured.

Following these challenges, a press conference at the Miami-Dade EOC’s media room was held where questions to Mayor Louis and Emergency Manager Fred Layden were posed by student broadcast reporters Jasmin Cazeau, Bernadine Theme and Nathaniel Rochester, followed by a Q&A session.

“The JFK Middle School experience at the Miami-Dade County Emergency Operations Center enables students to assume the roles of local government, learn problem-solving principles used by emergency managers and make the decisions necessary to respond to a disaster in their community,” said Bay Proby, StormZone founding director. “We are especially grateful to JFK Middle School science teacher Eva Ravelo for helping us plan this year’s exercise.”

Through the cooperation of Miami-Dade County Emergency Management and Miami-Dade County Public Schools, the exercise was conducted by StormZone, a nationwide education program that teaches students the science of severe weather, earthquakes and wild fires, as well as the critical importance of preparedness and volunteerism.

The 12-year-old program is a 501(c)(3) non-profit of Weather Expositions of America (WXEXPO), and is sponsored by AshBritt Environmental, a rapid-response disaster recovery and special environmental services contractor. In addition to Proby, team members include Erik Salna, StormZone meteorologist and WXEPO president, and J.P. Keener, STEM specialist and education consultant for PASCO Scientific. 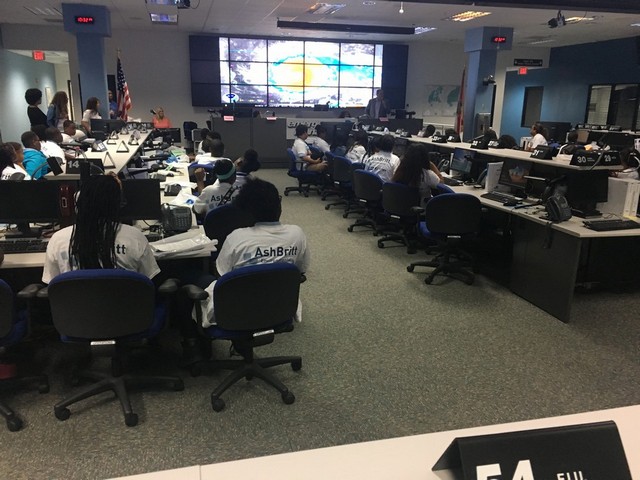