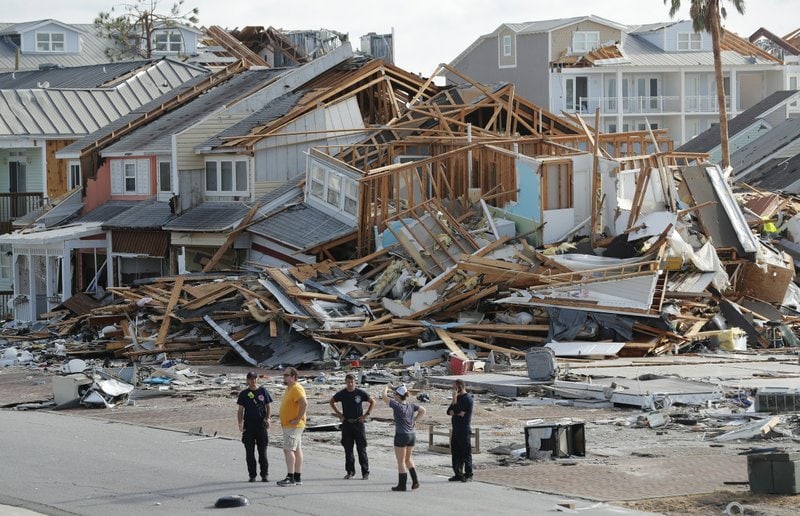 The Panama City area is still reeling from Hurricane Michael, which struck the Florida Panhandle in October 2018.

Saturday marks the second anniversary of Hurricane Michael’s landfall in the Florida Panhandle as a brutal Category 5 storm.

The storm wreaked havoc across the board — homes, schools, crops, timber farms and even Tyndall Airforce Base were dealt devastating blows. Two years later, the scars remain.

“The storm itself was traumatic, but that trauma has been compounded by a painfully slow recovery. We’ve made progress, but there is still a long, long way to go,” said Allan Bense, a former House Speaker and the Co-Chair of Rebuild 850, an organization dedicated to advancing the Michael recovery effort.

In all, Michael claimed the lives of 50 Floridians and caused $25 billion in damage, according to the National Oceanic and Atmospheric Administration.

“Florida’s Panhandle residents are strong and resilient, have great resolve, and aren’t given to complaining. But these are also some of Florida’s most financially challenged communities, least able to endure a disaster like this financially,” said state Sen. Bill Montford, whose district was hit hardest by Michael.

“To put things in perspective: Hurricane Michael destroyed hospitals and schools, eliminated jobs, and left tens of thousands of people homeless, including thousands of children. Our neighbors lost more than $1.4 billion in crops, timber, and livestock — some of that representing generational wealth that will not be recovered for generations, if ever.”

AshBritt Environmental CEO Brittany Perkins Castillo, whose company has conducted much of the debris removal in the region, said Hurricane Michael represents the largest and longest debris removal mission ever — still continuing after two years, compared to Katrina’s year-long cleanup

“As someone whose job it is to go into communities and clean up after natural disasters, I can say that Hurricane Michael was as devastating a debris generating event as any we have seen. Michael produced significant land- and water-based debris removal challenges, with a lot of debris coming out of environmentally sensitive areas,” Castillo said.

“Two years later, AshBritt is still committed to Bay and Gulf Counties, supporting ongoing specialized debris removal and recovery projects, and rebuilding efforts that are important to the community.”

An example of AshBritt’s rebuilding efforts is the Gulf Coast Children’s Advocacy Center, which serves more than 7,000 sexual assault survivors each year. The company has invested $750,000 toward the rebuild. It’s expected to reopen by the end of the year.

The Florida Division of Emergency Management has also been an important partner to communities shattered by the Category 5 storm.

Since January 2019, the division has paid out more than $831 million for Hurricane Michael recovery, including more than $177 million to Bay County, more than $47 million to the City of Mexico Beach, and more than $50 million to Panama City.

To help the region’s timber producers, the division and the Florida Department of Agriculture and Consumer Services are administering $380 million in federal timber recovery funding through a grant program that is accepting registrations through Nov. 20.

Former FEMA Administrator Craig Fugate said the emerging pattern of extreme weather conditions has caused the nation’s attention to shift from disaster to disaster, creating a significant risk that a region like the Florida Panhandle could be forgotten before it has fully recovered.

“Recovery from a devastating storm like Hurricane Michael is not a sprint — it’s a marathon. The nation was talking about Hurricane Andrew for a decade or more. But in this time of extreme weather and disaster upon disaster, many people would be hard-pressed to remember Hurricane Michael just two years later,” Fugate said.

“Even as we deal with new disasters like Hurricanes Sally and Delta, our leaders and our residents need to continue to provide the support that will allow the Panhandle to fully recover and avoid a death spiral. Without a continued focus, the economic fallout could last for generations.”

That’s where Rebuild 850 comes in. The organization has worked tirelessly to keep North Florida’s recovery front and center and to marshal ongoing support.

The Volunteer Florida Foundation’s Florida Disaster Fund was the financial beneficiary of the Rebuild 850 campaign.

“The Rebuild 850 campaign undoubtedly helped bring awareness to not only our fund, but the true impacts of the storm that can still be felt in the area today,” Volunteer Florida CEO Clay Ingram said. “As communities continue to recover, we encourage individuals to visit Volunteer Connect to learn more about volunteer opportunities still available.”

Will Weatherford, a former House Speaker and Rebuild 850 Co-Chair, urged federal and state officials, private sector investors, and individual Floridians and Americans to continue to support the region’s recovery.

“Rebuild 850’s message is all the more relevant as the Panhandle enters its third year of recovery,” Weatherford said. “In the early days after the storm, the primary help needed was dollars and volunteers. Now, more than anything, we need for people to visit the region and for business and government to invest in the Panhandle’s future.”